What better way to celebrate the Queens jubilee than with a tour of some of Britain’s finest countryside. Starting at the traditional start of the Coast to Coast route St Bees, we devised a scenic route through the Lake District, Yorkshire Dales and The North York Moors finishing at Robin Hoods bay.

Using the books ‘100 greatest cycling climbs’ and the sequel ‘Another 100 cycling climbs’ as inspiration we targeted some of the more iconic climbs in each of the national parks just to make the whole trip a little more memorable. We weren’t after breaking any speed records, this trip was purely a chance to enjoy some of the best ‘roads with a view’ that Britain has to offer.

Trips like these usually require a bit of careful planning with the route, hostels / hotels and transportation all being sorted a good few weeks in advanced. Not this time. With transportation being kindly supplied by a stranger with a van and all the hotels being booked at 9.30pm on the night before.

So after a much later than planned bedtime, our day started with a lift at 6 am bundled in the back of a van with no passenger windows. Fortunately it had seats! Arriving at St Bees we gathered our belongings and headed east. 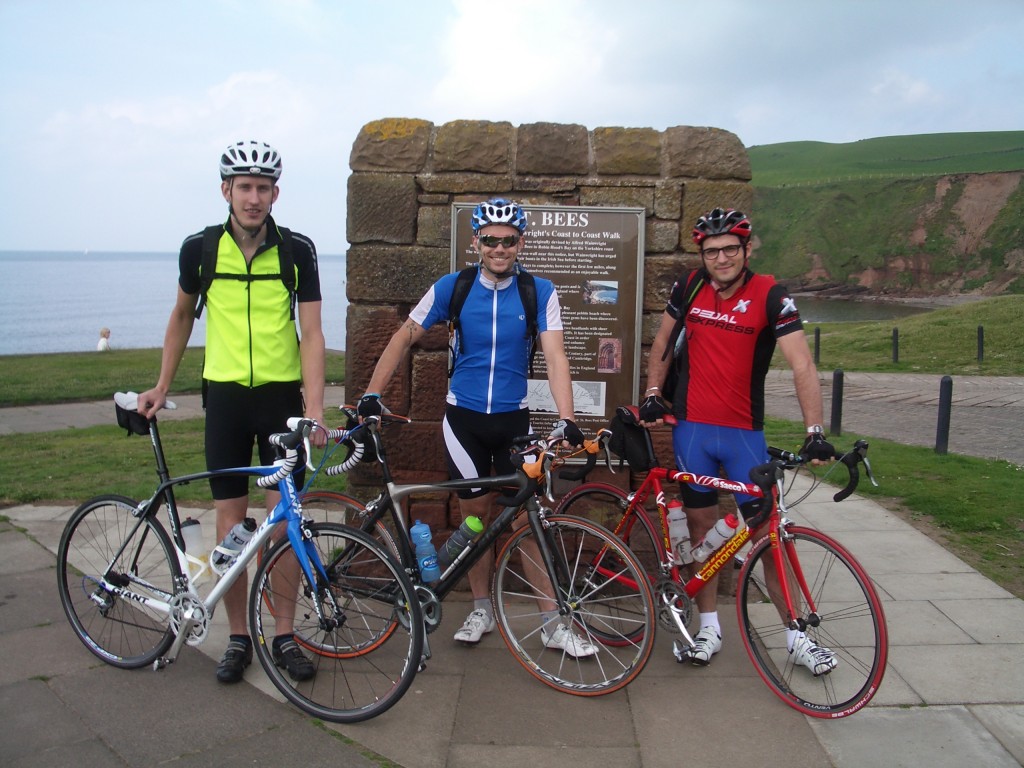 As I say taking in all the sites, we soon passed Sellafield nuclear reprocessing plant what a beaut! Spirits were high the weather was fine and the scenery kept on coming. 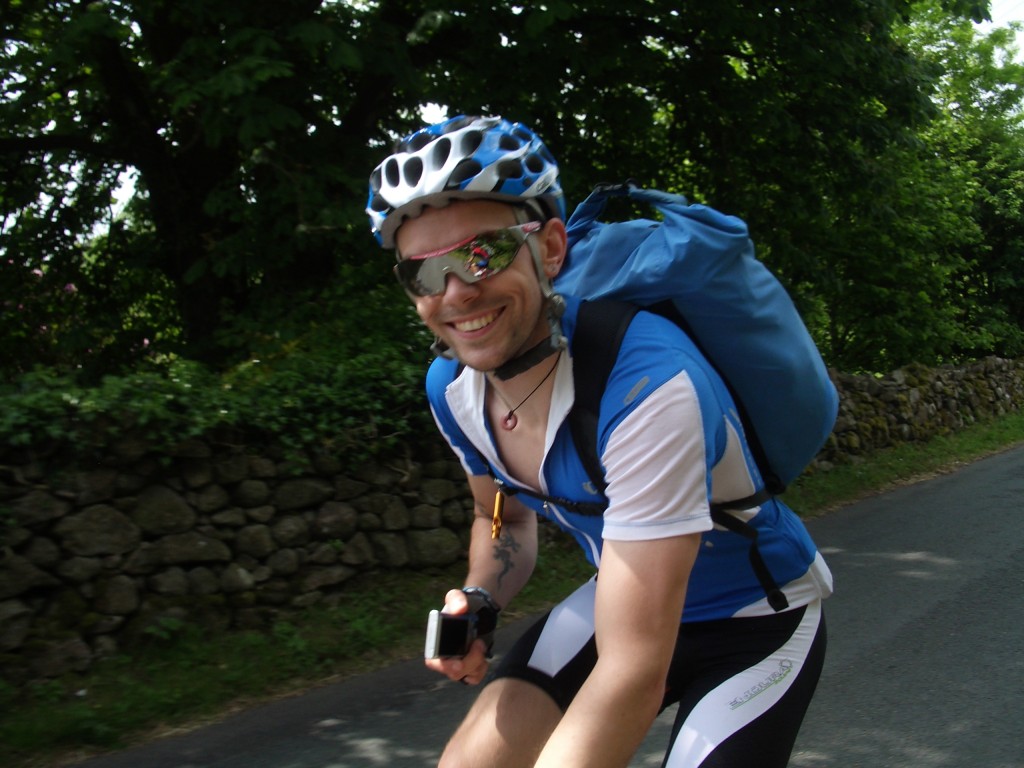 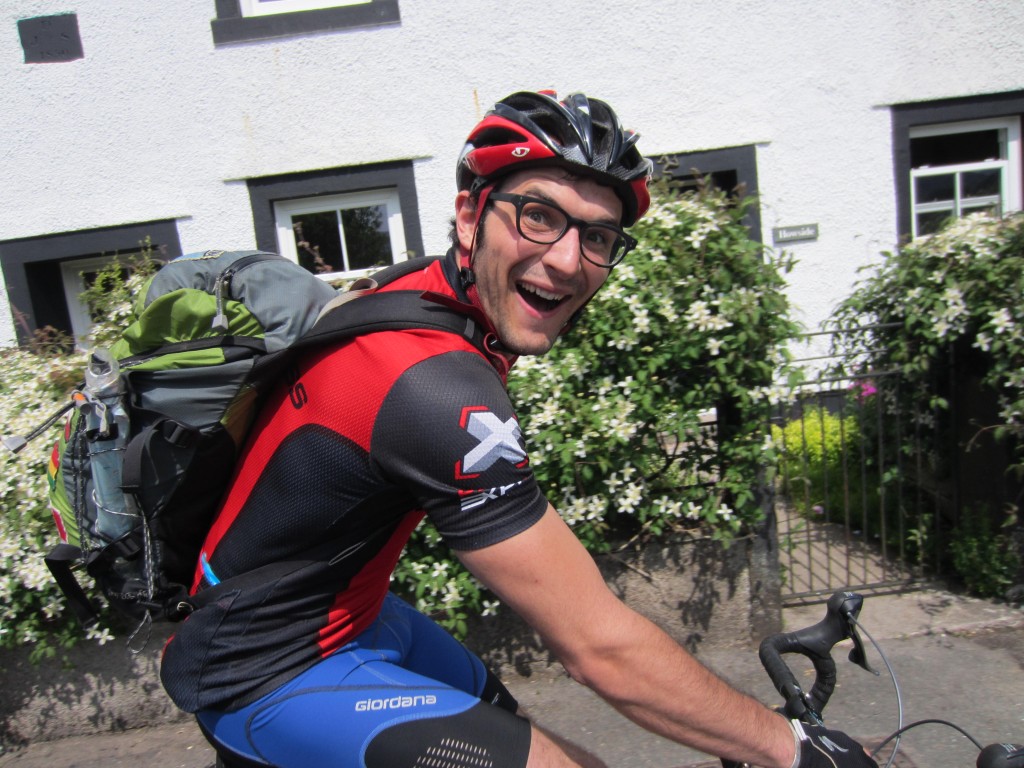 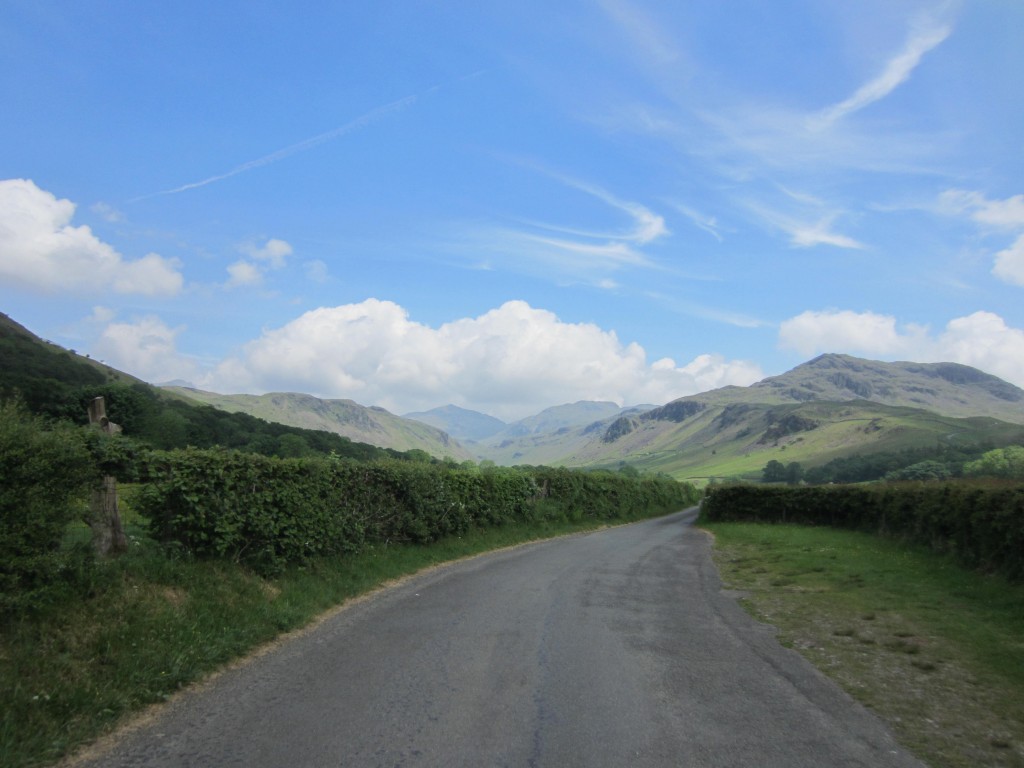 With a few rolling climbs we quickly found ourselves heading up a steadily climbing valley which lead us up to Hard knott pass. Given a 10/10 with the prefix ‘if you can climb this you can climb anything’ we knew we were in for a treat. 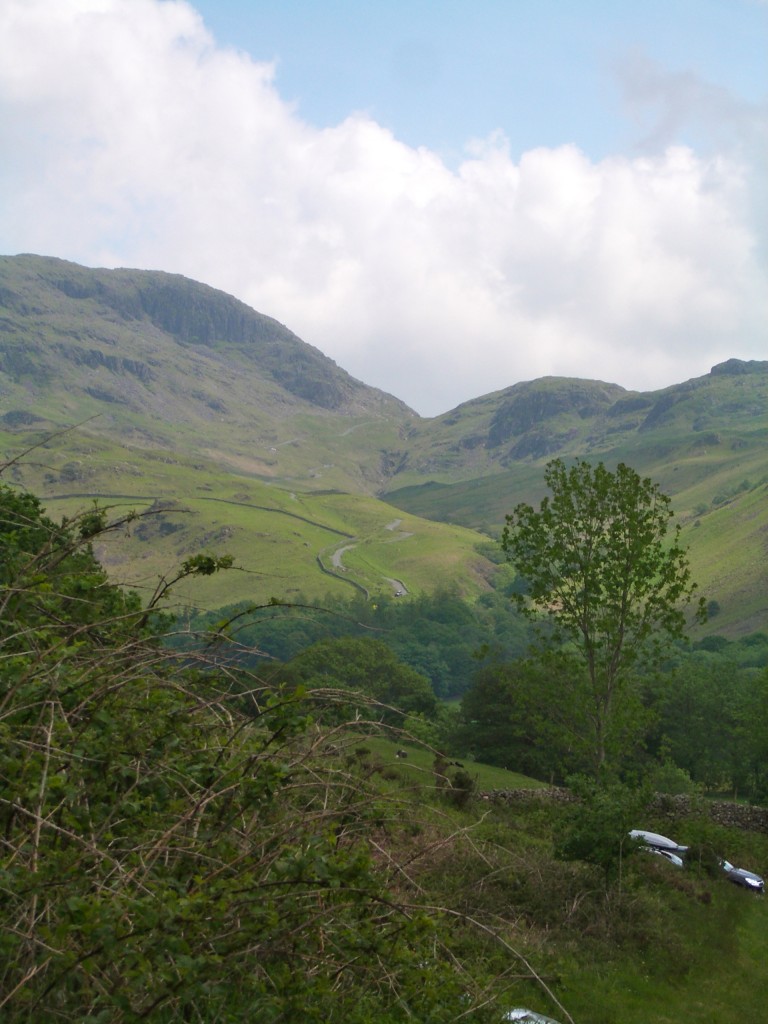 But before we could get too excited Mikes bike broke. Snapping a spoke when going over the first cattle grid, which wrapped itself around his rear mech that in turn kindly snapped his hanger off. Damn… 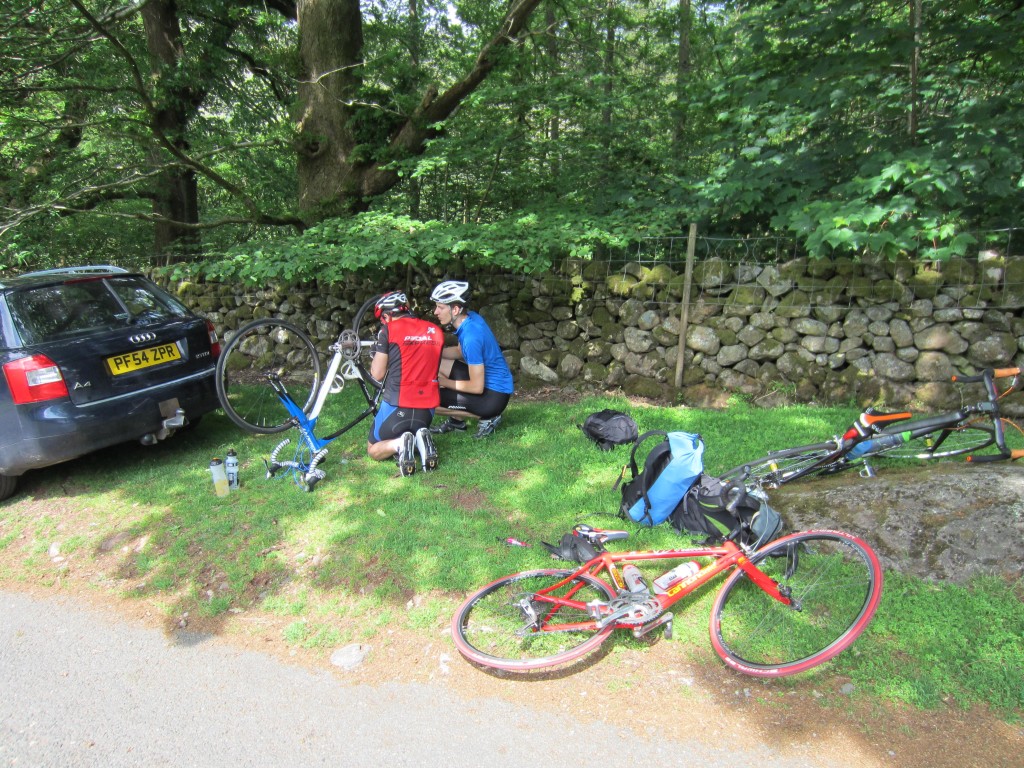 After a lot of deliberation we decided to single speed it, this allowed Mike to be able to ride it on the downs and flats but it skipped far too much on the climbs so he was forced to walk. 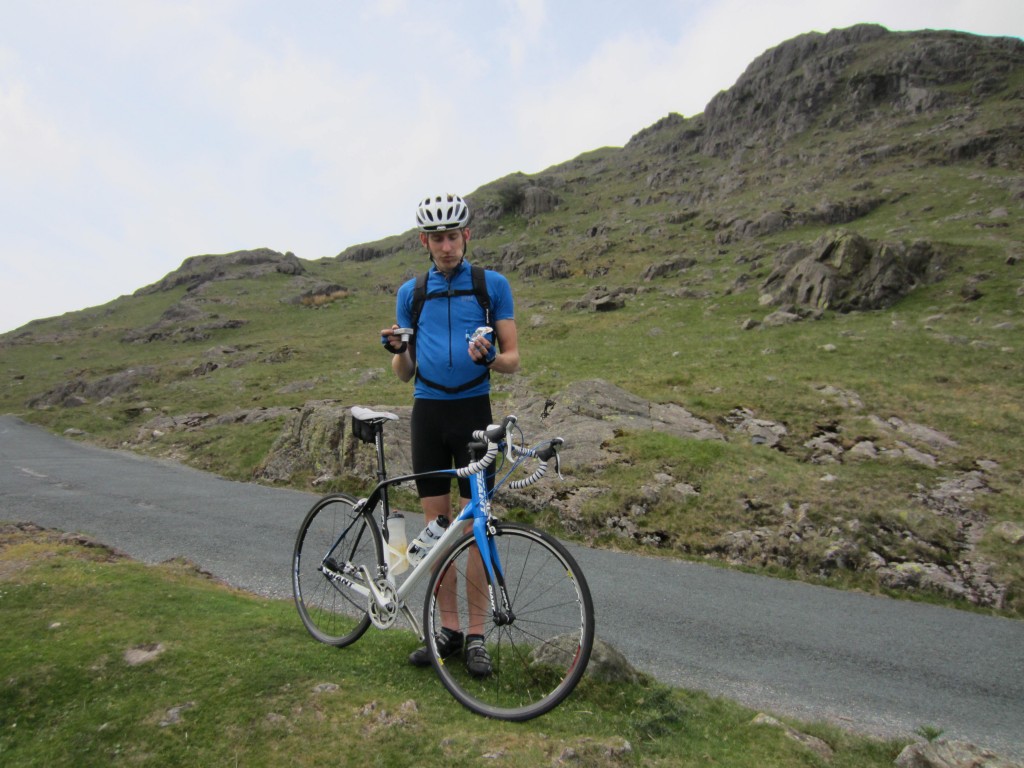 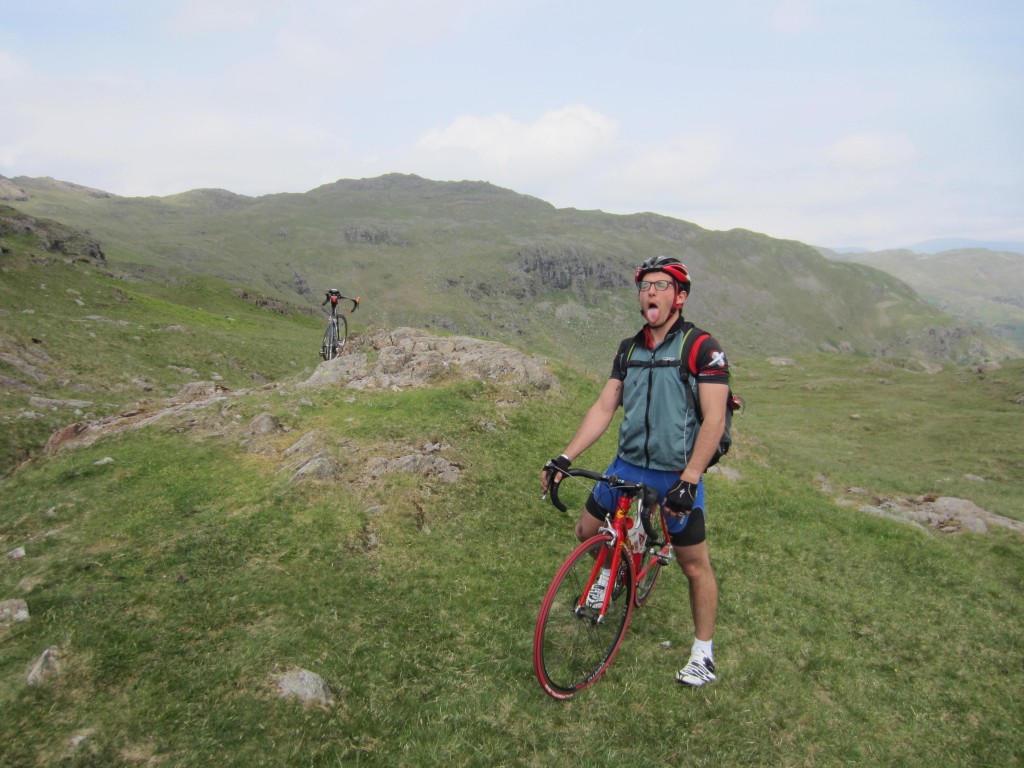 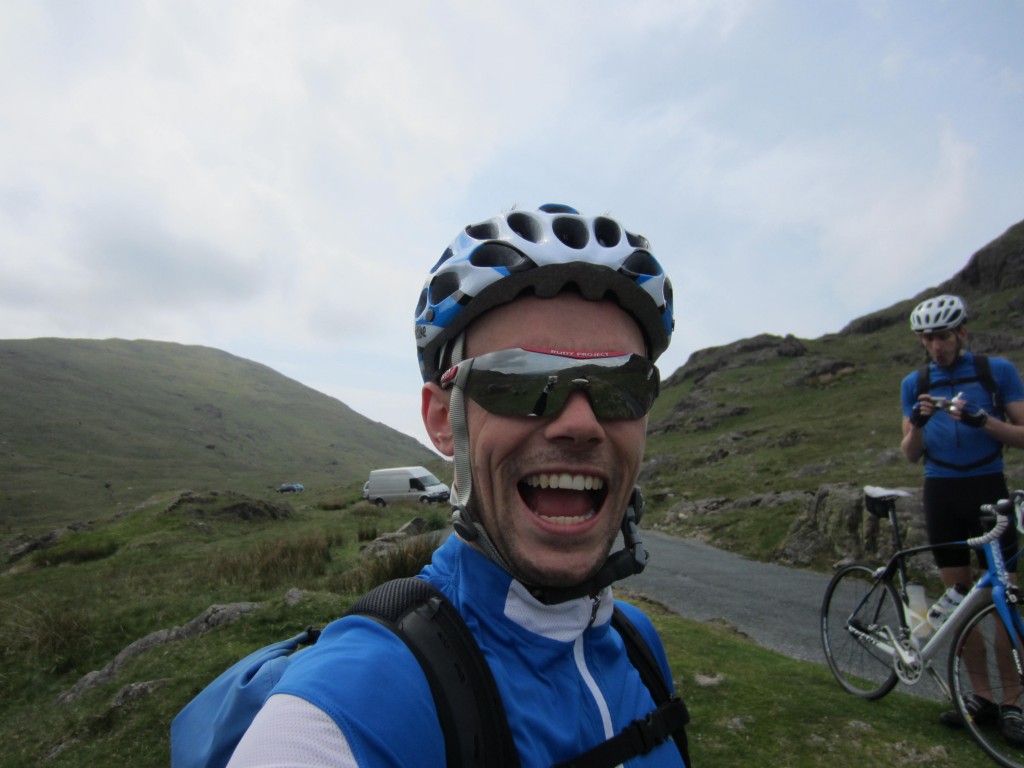 Hard knott pass is a damn hard climb. Long at over 2 km at an average of 15% with sections of 30%. The narrow strip of tarmac winds itself up the very steep hillside with corners that force you to take the wide line, which when met with oncoming traffic proves another tricky obstacle. After the last couple of very steep ‘switchbacks’ the final straight drag offers a nasty sting in the tail with the crest of the hill appearing to move further and further away. From here we moved across the top of the mountain and down Wrynose pass another classic climb. Since Mike had a little bit of time on his hands walking up the climb he managed to locate on his mobile a shop in Ambleside that sounded like it was going to be able to help out. Once we had managed to limp into town we were met by the friendly staff at ghyllside cycles who had a spare gear hanger that was filed into shape. To get mike back on the road 9 new spokes had to be fitted, plus a new chain and rear mech. Ah well at least his wallet was a bit lighter now! 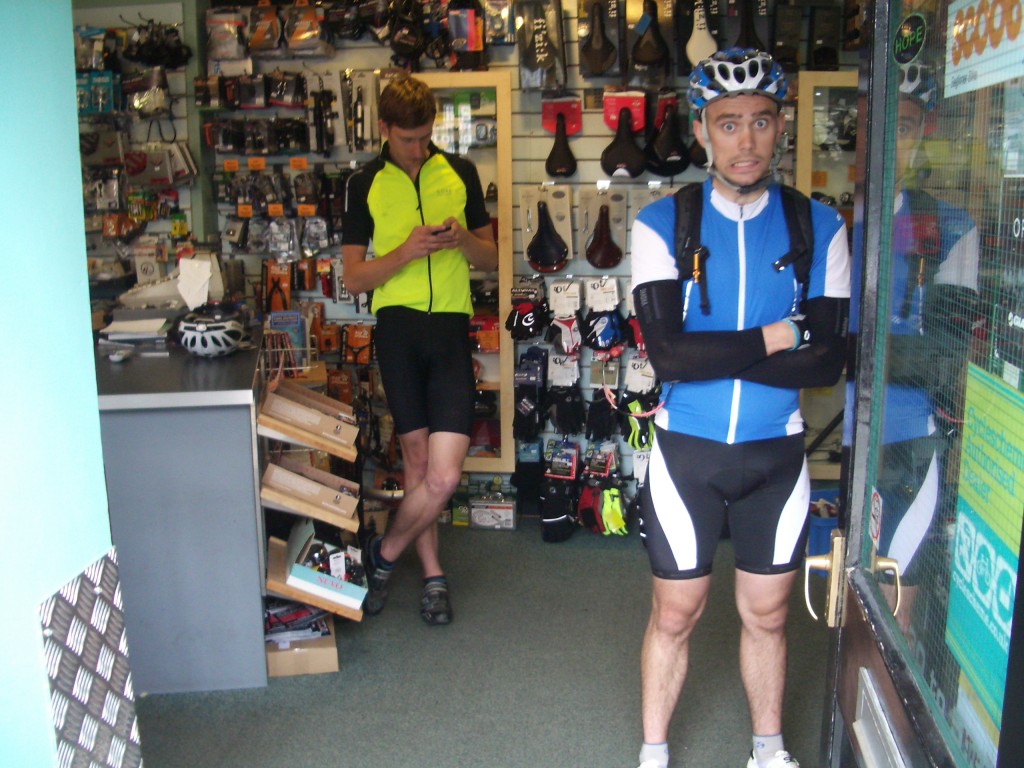 Our route took us down the west side of lake Windermere which forced us into climbing a series of very stiff climbs that lead us into the back of Kendal from here we climbed again heading towards our first hotel which was over the boarder in Yorkshire. 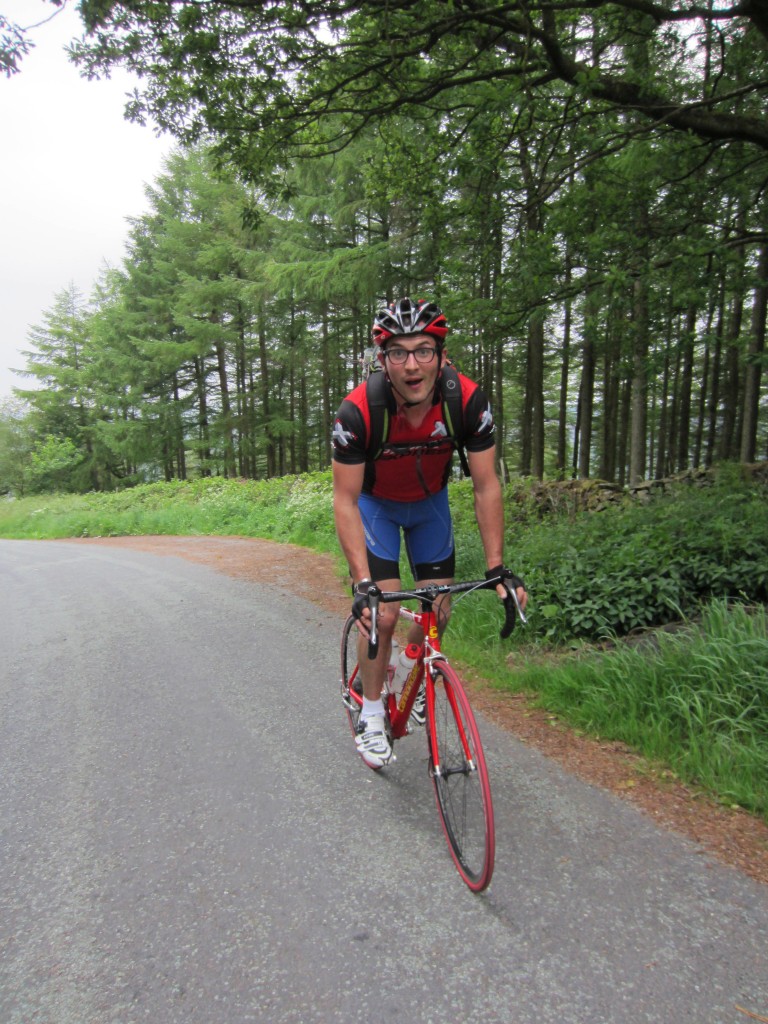 Tom was a happy man once he had returned to ‘gods county’. Cumbria had been tough on our, mind, body and bike. This first day had definitely shown us what to expect over the remaining couple of days. 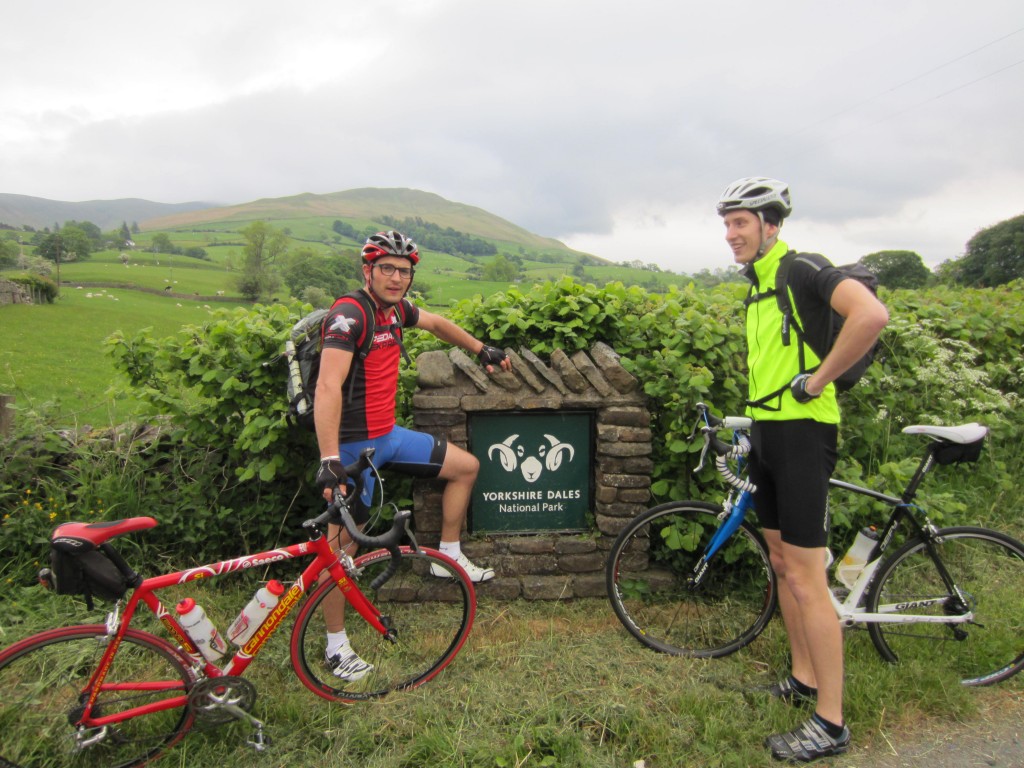 Without a doubt Thorn Hall has some of the best showers ever. Our last minute booking had definitely paid dividends here. Good local beer from Dent brewery and simple food for dinner and breakfast in good portions set us up well for the next day. 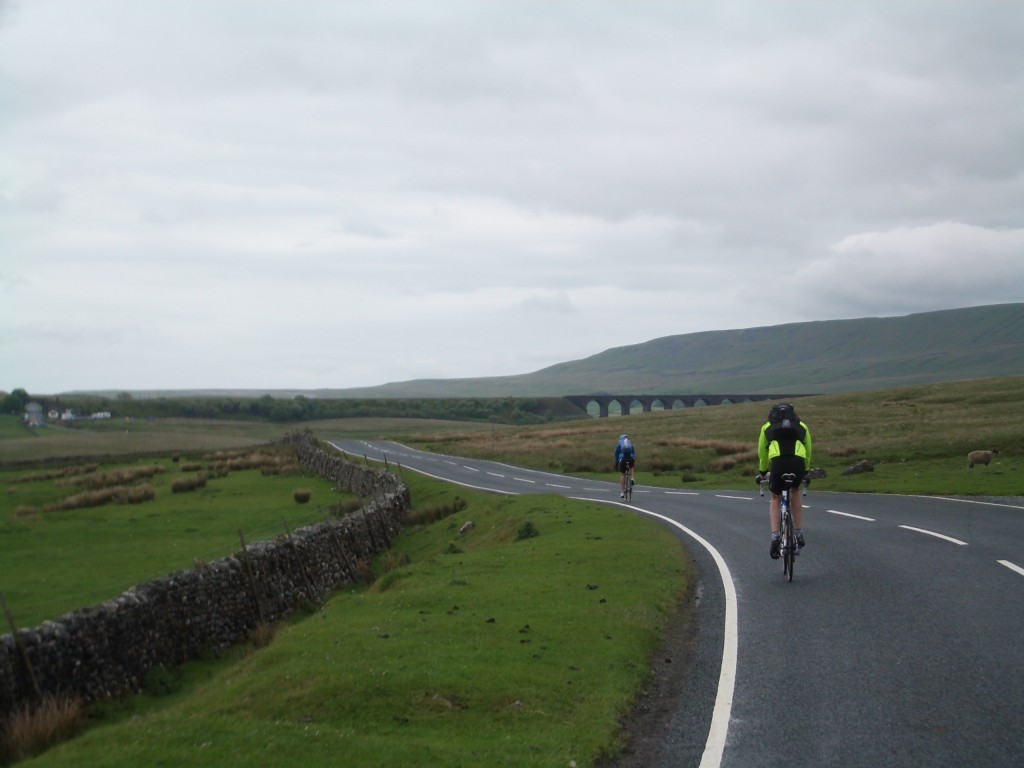 Most of England was suffering torrential downpours and on the Sunday there was a risk it was going to head further north and catch us. We were pretty lucky with the rain since the showers remained reasonably light though a cruel easterly wind made riding pretty cold and grim as we crossed the Yorkshire Dales. Passing buy the iconic rail viaducts the vast scenery wasn’t failing to impress. The tarmac of the Dales was also noticeably better than that of the Lakes with the climbs until the halfway point being a lot steadier. Stopping for lunch in a very traditional Yorkshire pub, the Falcon, which offered ale straight from the barrel, fish finger cobs and a warm fire. 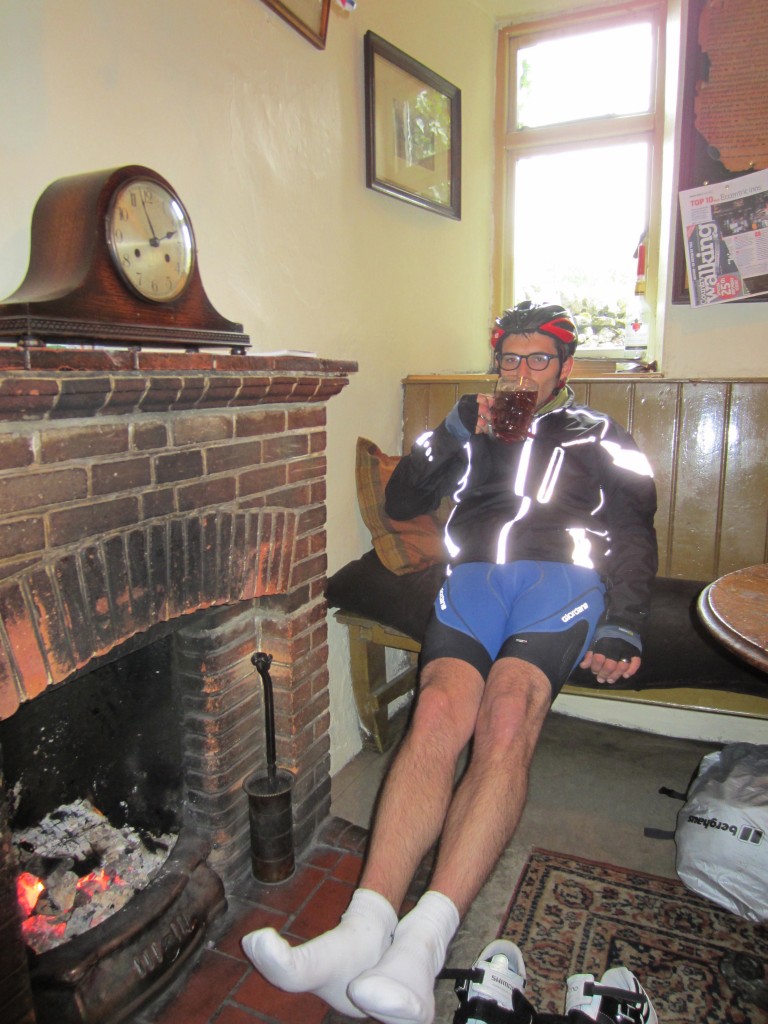 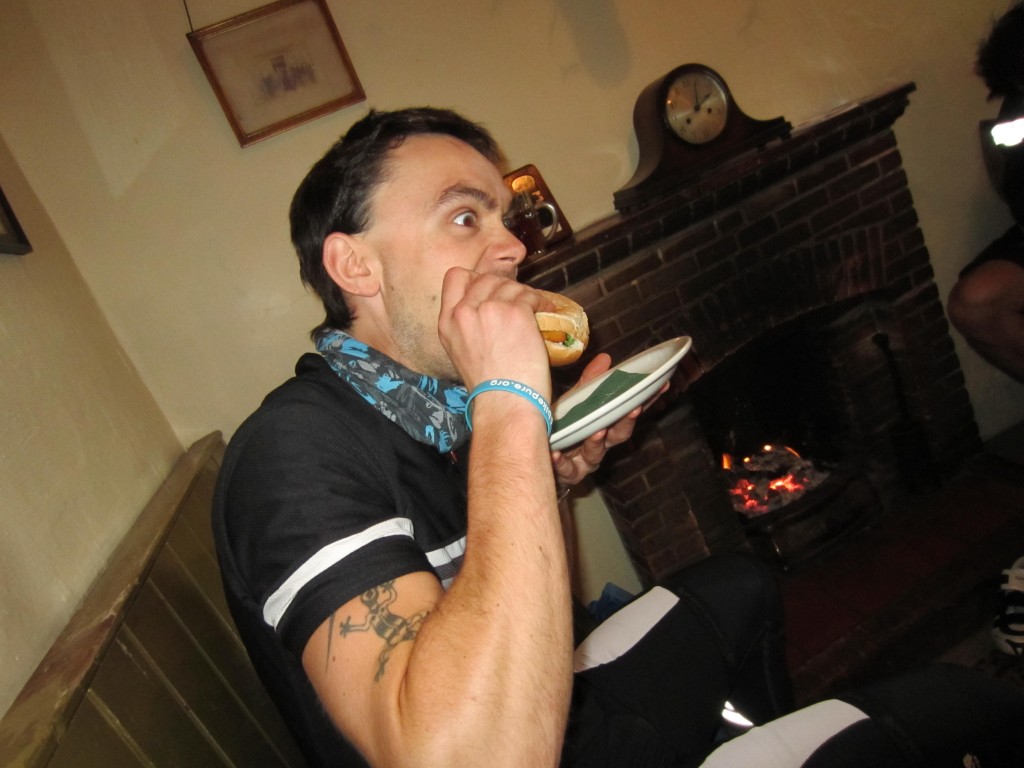 Fine preparation for the Park rash climb out of Kettlewell, rated 9/10 From a far it did look as if it was steeper than 45° as the climb appeared to impossibly wind its way up the side of the hill. Any momentum was quickly absorbed with a steep left hand bend that forced you to ride on the outside of the bend, I managed to get round before an oncoming car descended, which pushed mike who was behind to have to climb round the much stepper inside of the bend. The climb was made more manageable with a big dip in the road that allowed you to prepare for the final onslaught. From here it was pretty much down hill all the way to Beedale. 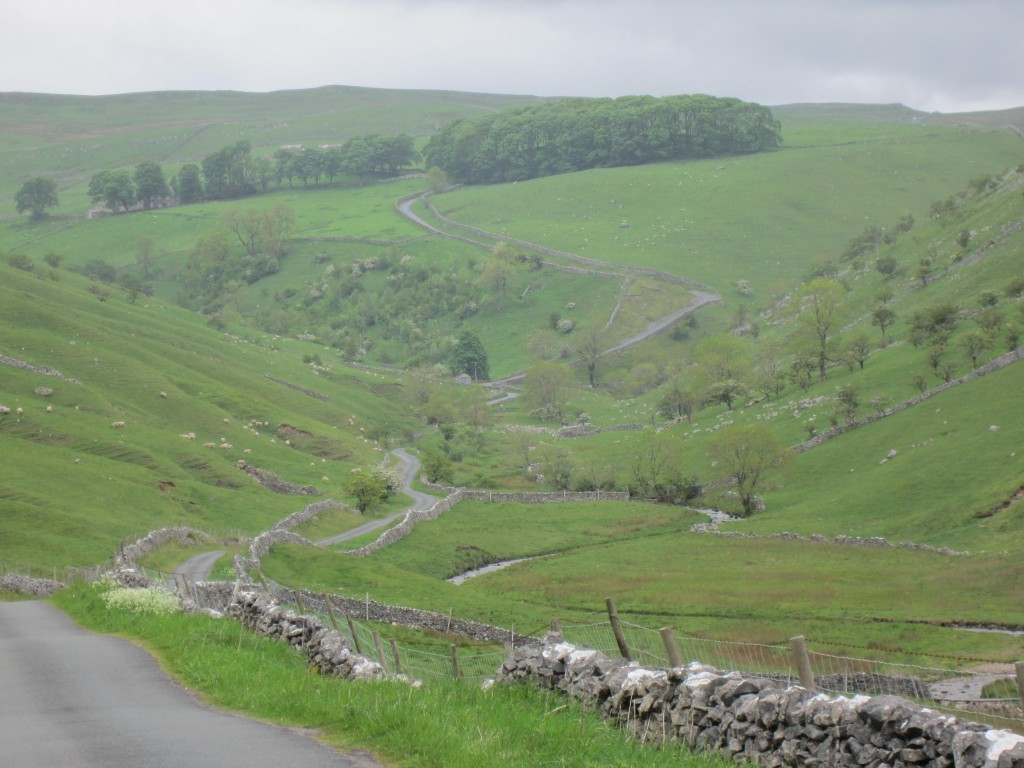 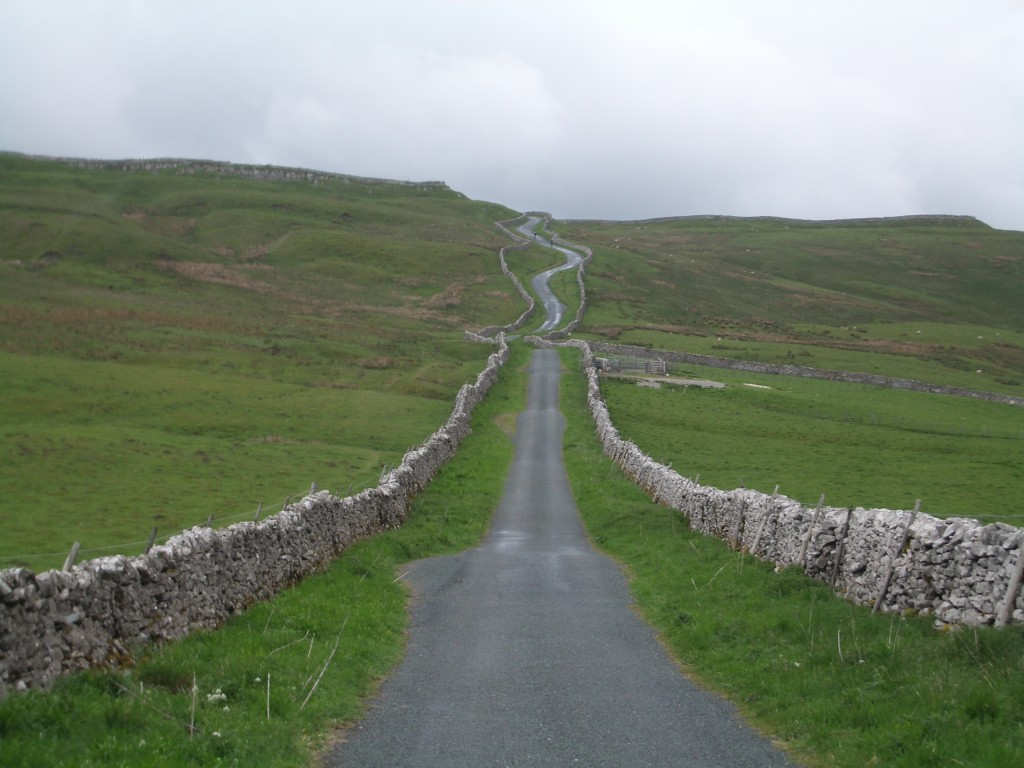 Our night’s accommodation was definitely not to the same plushness of the previous night. The last motel on the A1 before scotch corner, it had a bed, it was reasonably clean.. well my room was and they were kind in offering us a spare room for our bikes to be stored in.

The last day of our trip took us into the North York moors and our route involved nearly every type of typically English climb; Long moorland drags and ridiculously steep descents down valley sides that immediately rise up similarly steep sided cliffs. 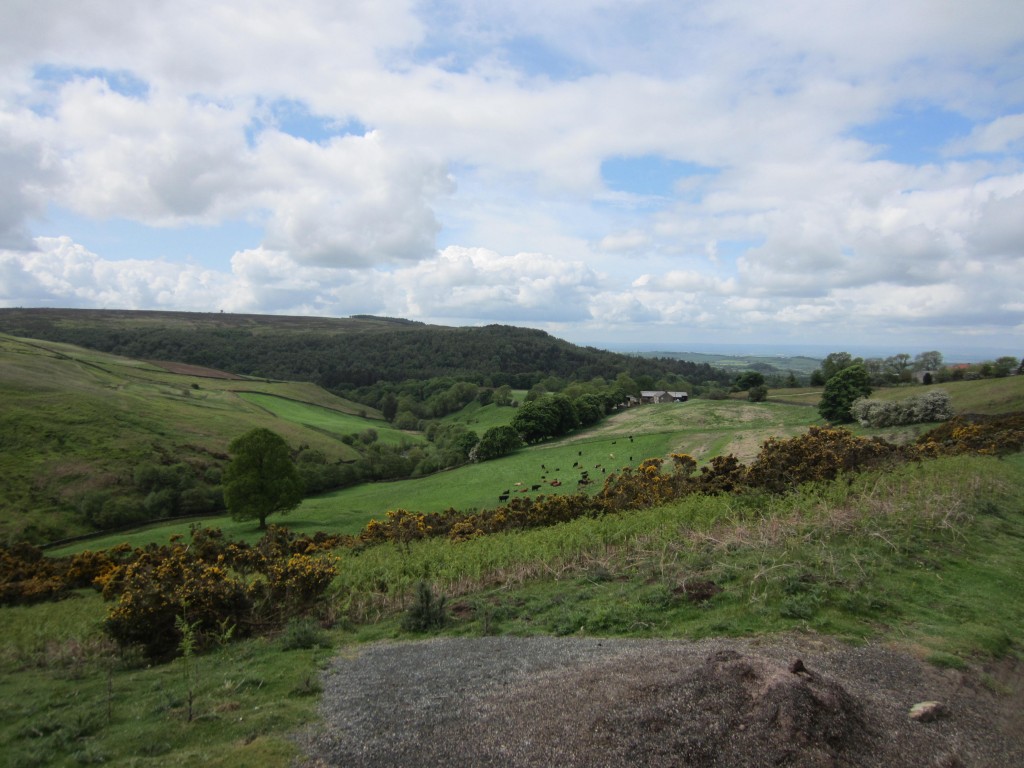 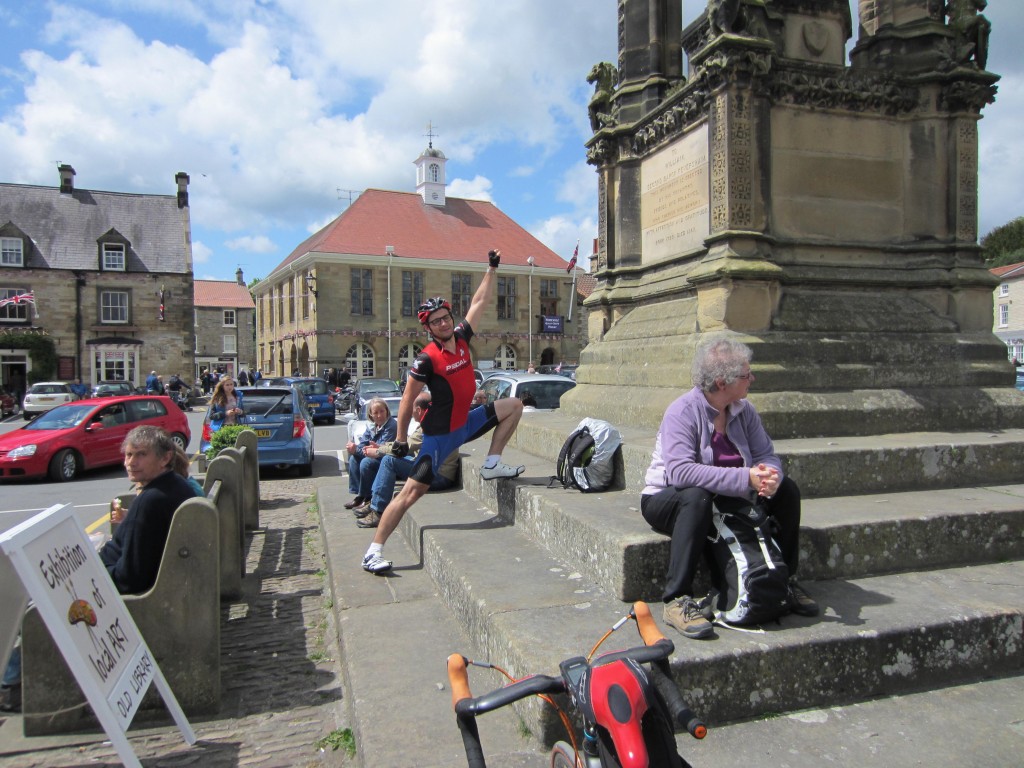 Unfortunately (or is that fortunately) our eastbound route sent us down Rose dale chimney, which I have to say is probably the steepest road I have ever seen with prolonged 33% sections. 10/10 and I can see that it definitely lives up to its reputation. 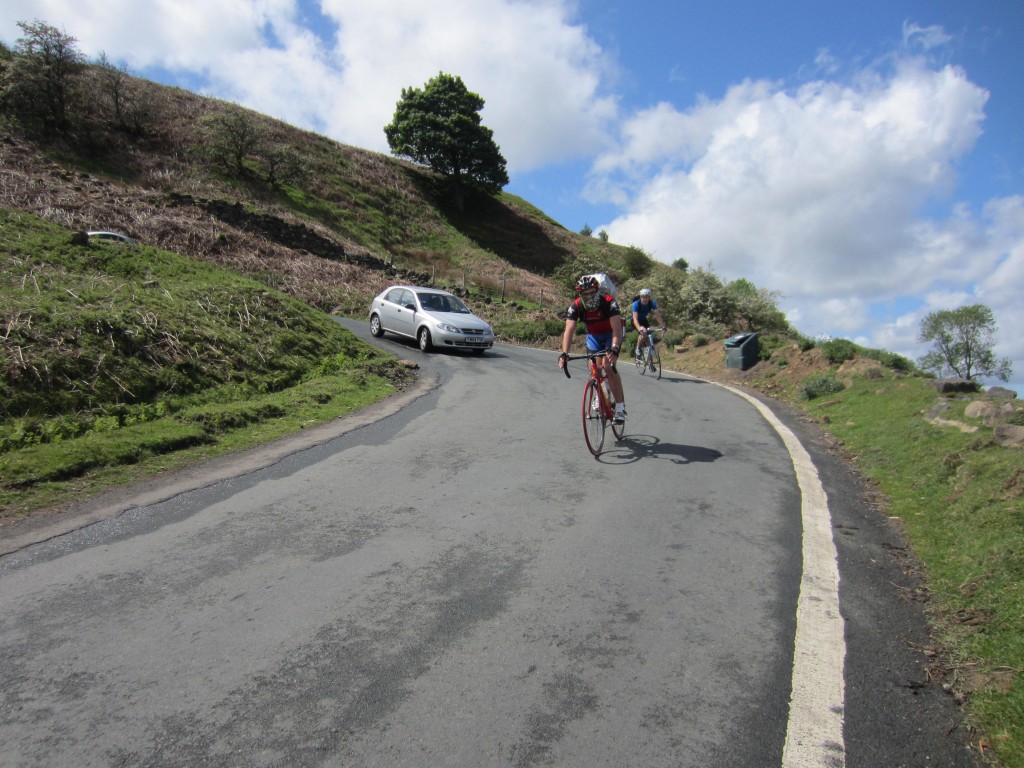 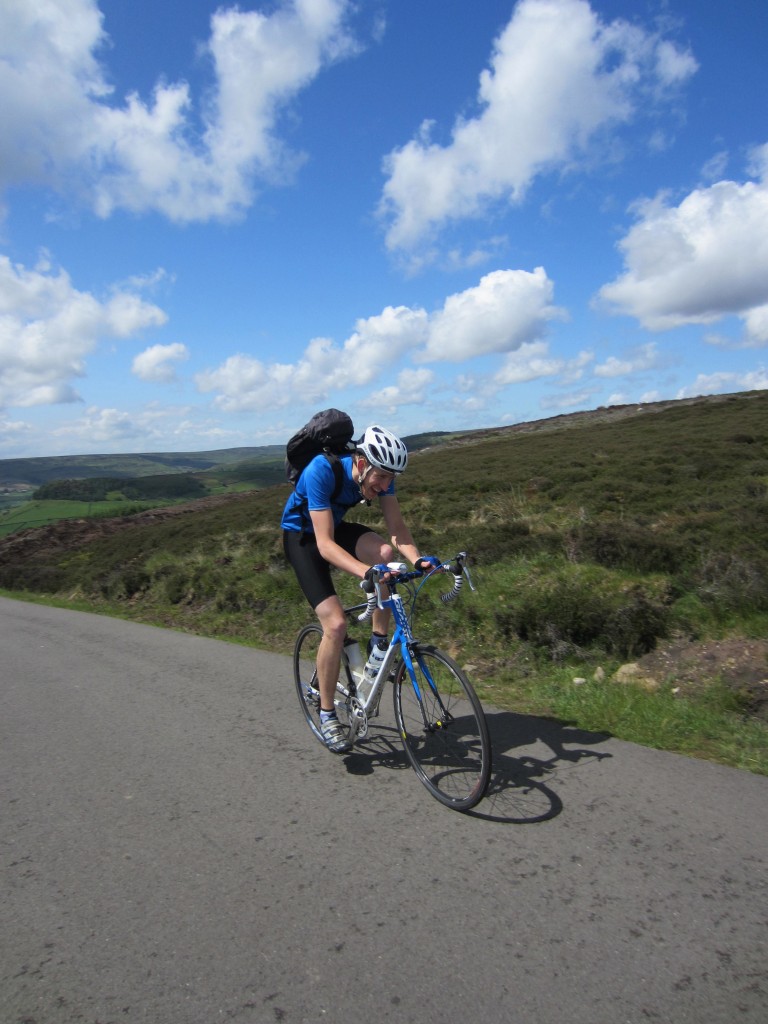 If we hadn’t been short on time then I would have been straight back up there, so I am looking forward to returning and sending it. At this point my legs were beginning to feel the previous days effort and the 25% climb that immediately followed that took us up to a similar initial height made me feel a little less like a deserter! From here we descended the Egton bridge climb that also had a sister climb up the other side of the valley of similar length and grade. We were now starting to get our first glimpses of the sea and the most severe climbs were behind us, though occasionally we were met with nice decisions like these! 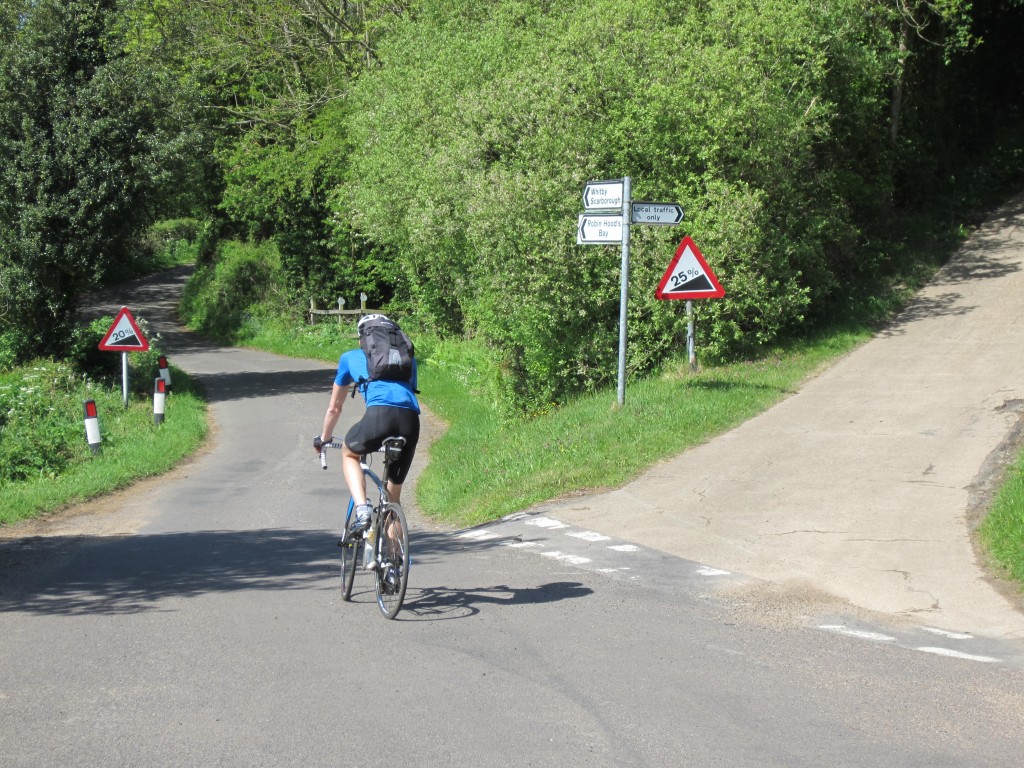 The crowds were out to meet us at Robin Hoods bay, The celebratory pint and tray of chips went down nicely. 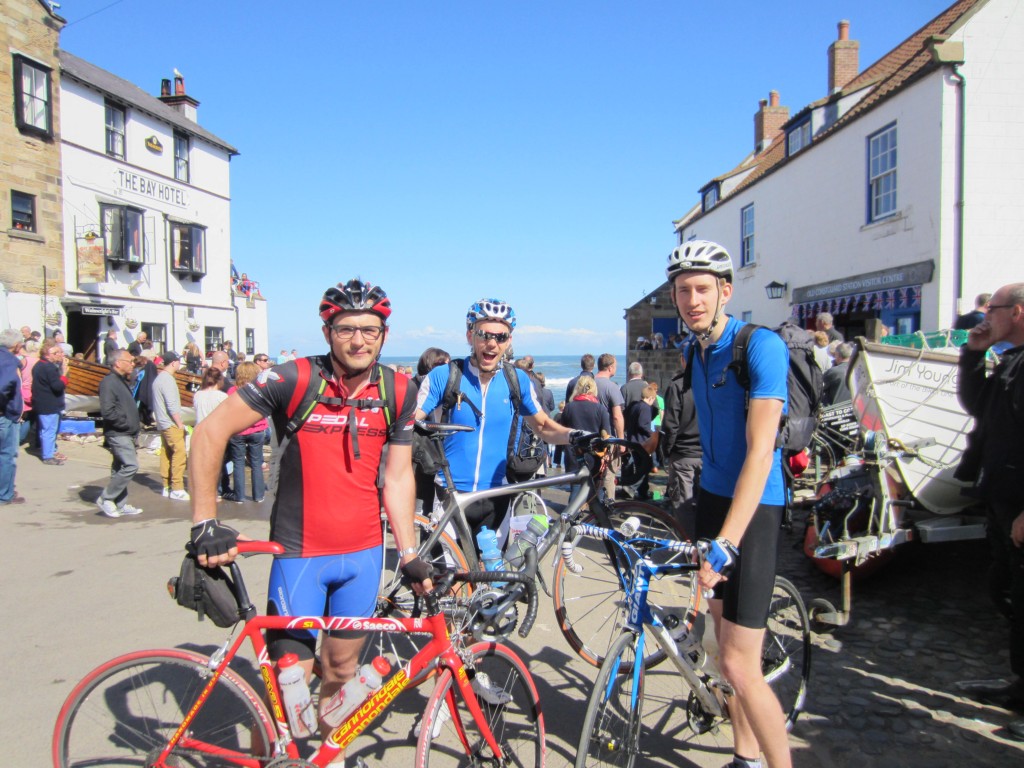 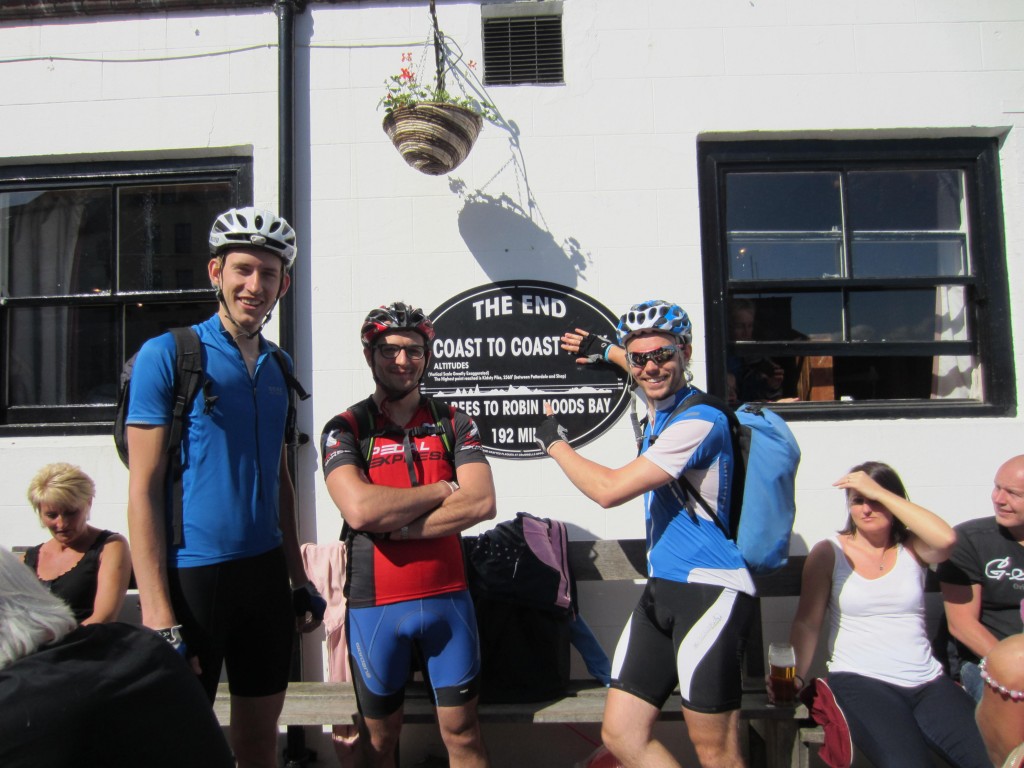 From here we had a further 20Km back to Toms house, which since we had managed to offload our bags was pretty rapid. The weather had been pretty much perfect all day and to be able to chill out in the sunshine with a drink felt well earned. 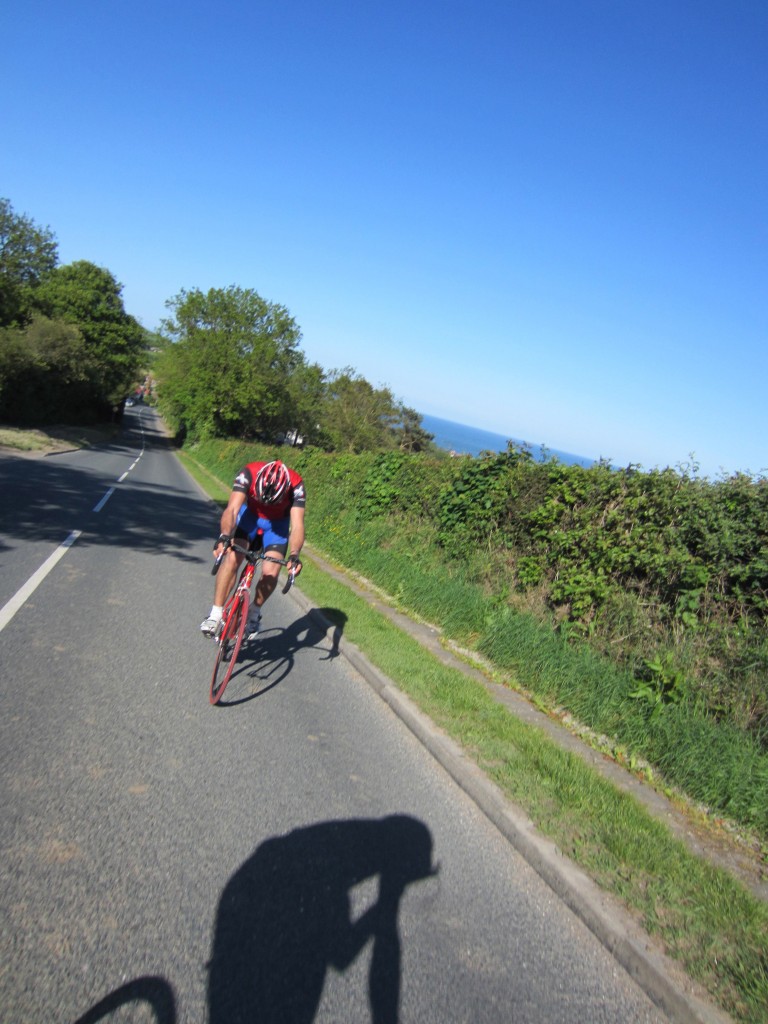 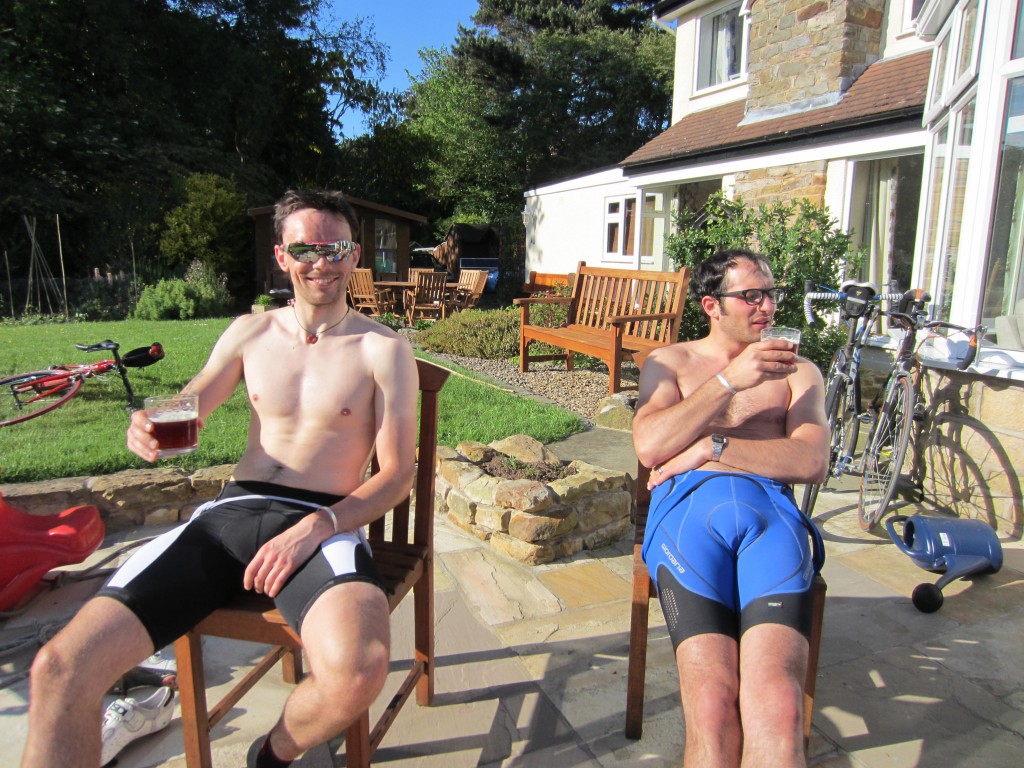 Many thanks to Sarah, David, Sue and Paul for meeting us at Robin Hoods bay and the for getting some celebratory Sparkly stuff. Cracking weekend, now time to start putting a bit more preparation into our next adventure!