Its a slippery slope… 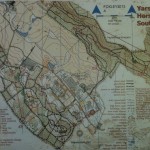 On Saturday we were racing in the British MTBO Long race, which is also one of the selection races for the British team. The race was held in the private estate of Foxley in Herefordshire.

The map was 1:10 000 scale, with a large ‘horseshoe’ of wooded elevation surronding central farmland. The route took us round the horseshoe, and made use of what could  have been fairly bland riding- this was anything but.

The route seemed to go up and then straight back down every hill possible- often climbing about 100m height each time, then storming back down another side. The red-brown soil I was told was clay and I have never raced on anything so slippery, it was awesome! You had to fight for grip on every turn of the pedals up hill, and the downhill was a lesson in body weight positioning and in finding your tires’ grip; with frequent back and even front wheel washouts when turning too sharply.

Everyone who came back in was smiling broadly, covered in mud, with bloodied ankles, and tired legs. I made a couple of mistakes, maybe costing 3 mins, but fortunately did just enough to come in ahead of Ben Plowman by a narrow margin. Everyone found the conditions difficult and made keeping a constant eye on navigation almost impossible, so I think mistakes were commonplace.

All in all it was one of those brilliant races, where conditions were so wet and slippery it made it really quite interesting and exciting. The MTBO races this year have been awesome and I cannot wait until the next round in Pickering, and also Lee and Crag Quarries sprint later in the year. 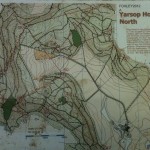