I entered this race with a target of gaining a top 10 result; I would achieve this by putting in steady sub 1 hour 30 laps with an absolute minimum time spent stationary in the pits. Stopping and retiring wasn’t going to be an option and if I had time at the end of the race, I would do the extra lap. All these things might seem like an obvious race strategy, which to be fair, they are. Since this was going to be my 6th start of a 24 hour race – experience told me that at 2 in the morning if it doesn’t seem to be going quite to plan, the gremlins come out and self-sabotage almost seems like a reasonable option. Those thoughts have never won before and they sure weren’t this time round.

The event date change move from early May to April had definitely taken an impact on the entry numbers since many will have felt that it was too early. Though I now think it has done me a big favour, making me put in a little bit more in over the winter and has kicked off the season early.

The start took place in typical fashion with a great send off from the little town of Newcastleton, led out by a bagpipe parade. This time I stayed nearer the back to last year since concertina effect of the riders bunching up behind the pace van was a nightmare with it going over the speed bumps up to the race track. This race definitely has the most relaxed feeling starts and it allows a more reasonable warm up for what we have all let ourselves in for. 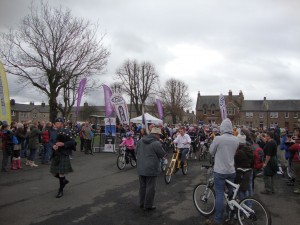 The track is particularly unique in that there aren’t that many races in the year that are held at established trail centres. So the good bits of the course are really fun, well built, flow well, engaging and fast. But as with many trail centers the transitions from one part of forest to another involves many kilometers on long fire road sections, which when the legs start to get tired can be where the real time is lost/gained.

Pretty much the month before the race the weather in the UK had been absolutely amazing, this definitely helped the training and it even started me thinking that maybe this race wouldn’t be quite the wash out that it was last year. The week before our more typical spring weather arrived bringing with it high winds, freezing conditions and snow. The snow had fortunately cleared from the area by the weekend and for the 24 hours of the race other than a bit of drizzle the weather stayed dry and not too cold. This allowed for the track to actually improve as the race went on, with smooth lines appearing on the fire roads and the mud on the last decent to actually start to dry out! 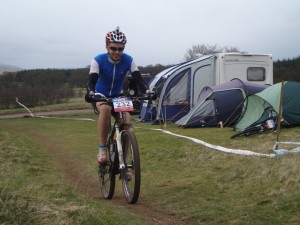 So my race started pretty well and to plan riding steady lap times, nice and quick on the downs and feeling strong on the ups. After the 90km mark my legs were beginning to feel the 480m of climbing per lap and around this time it had begun to start getting dark. Since this race was being held nice and early according to the BBC weather sun set was at 20.00 and sun rise around 6.00 giving us 10 hours of dark, this being right on the limit of my new Exposure 6 pack  light on its medium setting. I managed to avoid putting my light on until 20.30 when a marshal actually told me to put it on, it had begun to get pretty dark by then in the woods.

Normally when it gets dark this is when I make all my gains during a race. However I became quickly aware of how tired I was starting to feel. The heavy mist that was sitting over the track over higher ground wasn’t helping matters since I was finding it hard to focus of the ground ahead on the climbs. At one point I was sure I lost consciousness for a microsecond. At that point I realized that I literally hadn’t felt so bad on a bike ever in my life, so I thought to myself, what were my options? 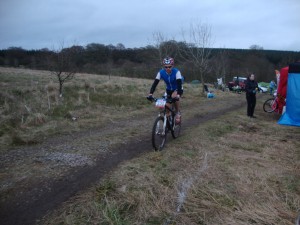 What if I pull out now, how would I feel? I’ve definitely achieved something in that I’ve reached a new upper limit of discomfort, but if I do stop, is that actually my limit? I had to find out. So I carried on riding. In reflection (my mind might be blocking bits out) but over the next few night laps the discomfort didn’t really get any worse. I kept asking myself am I enjoying this and the answer was always yes!? The down hill bits of the track stayed fun and I kept looking forward to particular sections.

6 am arrived, I was still riding, it was still dark and my light was now on its lowest setting and the battery level gauge wasn’t looking good. Fortunately the helpful guys at Exposure happily exchanged my light for a nice full one. I needed a bit of full beam! 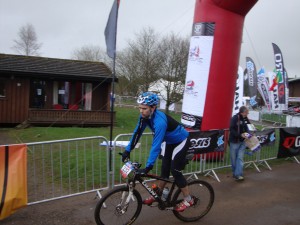 The race finished for me at approximately 11.15 am. I’m sure we must have had over 11 hours of darkness and it had been mentally the hardest race I’d ever done.

Normally the staying awake bit I find easy but I’ve attributed my performance on the day to a few reasonable factors. Firstly not to seem like I’m making up excuses; it was a tough old course about 1km further than last year and with a little bit more climbing no one was really going to find it easy! But next time I’m going to make sure I get enough sleep and rest in the weeks leading up to the event. Funnily I feel more mentally rested since doing the race than I did on the Friday before, my legs might say something else though!

5 mice, 1 frog, 1 mole, 1 rabbit, a few birds of prey, a few other birds, a Stone that really looked like a crab -hallucination induced, and a gorilla in a kayak playing a ukulele – pretty sure that one was real!?

So all in all, pretty happy with finishing 15th in my category and 18th overall. It was definitely a memorable one learning some pretty important lessons. Looking forward to my next event.

all of this wouldn’t be possible if it weren’t for the dedicated PedalPursuit.com support crew who were amazing once again staying awake all night, and staying focused on me making it possible for me to finish what I started.